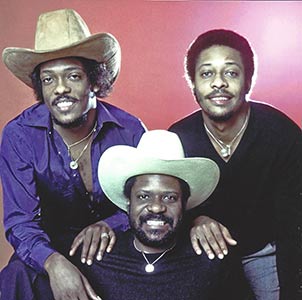 One of the most influential groups in the history of R & B, Charlie and his brothers, Robert and Ronnie Wilson, made themselves famous with their non-stop humorous funk grooves. You can probably witness their style from many of the “new school” performers such as, R. Kelly, Keith Sweat, Ruff Endz, Guy, Blackstreet, Jagged Edge, and Aaron Hall who borrowed their grooves or vocalese from the Gap Band’s arsenal.

The sons of a Pentecostal minister, the Wilson brothers started performing in 1967 when they formed a group along with Tuck Andress of Tuck and Patti Fame. The GAP Band, named after the black business hub of their native Tulsa, Oklahoma (Greenwood, Archer, Pine Streets), became the band of choice for visiting musicians. “We used to be called the Greenwood Archer Pine Street Band,” Charlie explains, “but that was a bit too much to put on posters, so we abbreviated it to G.A.P. Band. Then once, through a typographical error, the periods disappeared and out popped the GAP Band.”

During the band’s early career they opened for major hit bands like The Rolling Stones, and supported J.J. Cale, Willie Nelson, D.J. Rogers, and Leon Russell. In the 80’s, Charlie toured with Annie Lennox and the Eurythmics. The GAP Band has always been a touring powerhouse. Known for their high energy, groove thumpin, party-like set the band is dubbed in many circles as “the black Aerosmith.” Throughout their career they have performed with an eclectic set of other performers such as, Frankie Beverly and Maze, The Isley Brothers, R. Kelly, Mary J. Blige, L.L. Cool J, Destiny’s Child, Ashanti, Ja Rule, and Dru Hill. From the late 70’s to early 80’s the band dominated the R & B charts with their hard driving funk grooves. Four of the band’s nine albums went platinum plus (The Gap Band II, The Gap Band III, The Gap Band IV, and Gap Band V – Jammin), selling millions of records and including 15 Top Ten R & B hits, and four #1 R & B hits, such as, “You Dropped a Bomb on Me,” “Party Train,” “Burn Rubber,” “Outstanding,” “Oops Upside Your Head,” “Early in the Morning,” and the smooth love song, “Yearning for Your Love.” “Outstanding,” alone remains one of the most sampled songs in history and has been used by over an astonishing 150 artists, including, Madonna, Tina Turner, Will Smith, Usher, George Michael, and even Laker’s Center Shaquille O’Neal to name a few.