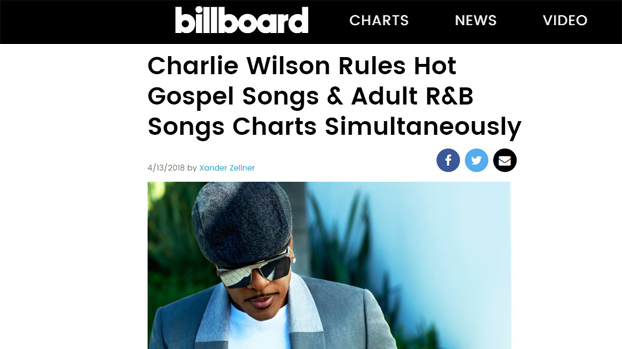 Confirming he is truly blessed Charlie Wilson and Michael Paran, longtime manager/CEO of P Music Group, take Wilson’s iconic stature to a historic level by achieving yet another career first for Wilson: two singles, “Chills” and “I’m Blessed,” reach #1 simultaneously on Billboard’s Adult R&B and Hot Gospel Charts, respectively. Both singles are from Wilson’s In It To Win It album released January 2017.

In the same week, “Chills,” the 4th single promoted by P Music Group from Wilson’s “In It To Win It” album, has become Wilson’s 11th #1 single at radio as a solo artist* and is currently #1 for the second week on the Billboard Adult R&B Chart.  With “I’m Blessed” reclaiming the #1 spot again on the Hot Gospel Song Chart, Wilson also becomes the first artist to achieve the feat of having both top spots simultaneously on those charts.

Wilson is no stranger to overcoming the odds.  He has been clean and sober for 22 years and prostate cancer free for 9 years, two facts he openly shares with the multi-generational audiences who attend his critically-acclaimed concerts.

“I am overwhelmed with joy and can’t help but say I’m blessed,” Wilson tells Billboard.

*all radio charts including Mediabase

Happy 70th Birthday to our client and R&B icon @CharlieWilson! We love you and wish you another year filled with bl… https://t.co/ya2xVMI5ZJ

We can’t wait to watch our client @babyface perform America the Beautiful at Super Bowl LVII on Sunday, Feb 12th on… https://t.co/k1MP7Ge9WX