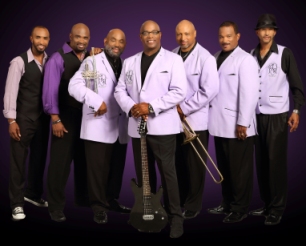 Once upon a time there were many great self-contained R&B and funk groups, innovative, immensely popular artists such as Earth, Wind & Fire, War, The Meters, The Commodores, Kool & The Gang, Lakeside, Slave and many others who created a body of work in the 70s and 80s that still thrills audiences today. ConFunkShun was one of the successful bands in this wave, scoring 25 chart hits between 1976 and their break-up in 1987, including such smash hits as “Ffun,” “Chase Me,” “Electric Lady,” “Baby I’m Hooked” and others—many of which have been liberally sampled by the hip-hop generation. When the band re-united with lead vocalists/songwriters Michael Cooper and Felton Pilate, after more than two decades apart, they were welcomed back by their fans as they toured nationally to adoring crowds. Not content to ride on their past hits, they began writing and recording new material which they found got great response in concert.

“We believe music must invoke emotion and promote body movement,” confesses Michael Cooper. “It should bring smiles and tears and draw people to you. When you perform you want your shows to be talked about positively as people have worked hard for their money and they are spending it to see you. So we work hard to please them.” Felton Pilate adds, “When our fans hear More Than Love, we want them to experience a sense of familiarity but at the same time we want to deliver to them a dose of refreshing newness.”

More Than Love does more then please it solidifies ConFunkShun’s righful place in the pantheon of the greatest R&B bands to ever do it. Sweet crisp vocals, tightly knit horn arrangments, great lyrics and bumping tracks are all signatures of the classic ConFunkShun sound. Not many bands can come back as strong as before. More Than Love proves that nearly two decades later they’ve still got it. “We remember when musicians played live in the studio and the Moog synthesizer was brand new,” reflects Cooper. “We also remember when the coral Electric sitar was all over the radio and the Roland 808 was driving women crazy. We tried to bring that vibe from the 70s to this CD with a modern touch.”

More Than Love opens with the care free, sexy and syncopated “Your Night,” which peaked at #21 with a bullet on the Billboard Urban AC charts and that sets the mood for the soulful and inviting ride ahead. The title track, a bluesy and sultry quiet storm anthem, is as sweet as they come, and the passionate “Dance N With A Grown Man,” speaks to gifts that only a mature man can deliver to a romantic relationship. More Than Love also features the epic, vulnerable and convincing “Make Me Over” and “It’s Time,” which could very well become a wedding song favorite.

On “No Place Like Love” ConFunkShun scores a one two punch as both Michael Cooper and Felton Pilate take on lead vocals, calling to mind The Sound of Philadelphia’s MFSB and “Big Girls” celebrates the beauty of women in all shapes and sizes. ConFunkShun collaborated with producer/writer Jamie Jones of All-4-One for their hard-hitting new single “I Miss You,” which has all the makings for a summer hit. The single has just entered the Billboard charts at #30. Michael Cooper shares, “We all mess up from time to time and then she’s gone. ‘I Miss You’ is about that moment you know it’s time to put on the knee pads and get her back!” You can’t help but sing along and get swept up in the song’s undenible groove.

“Say Yo,” features a Caribbean flair as it opens with steel drums and an undulating reggae groove that underscores the flavorful vocals of both Cooper and Pilate. A Zydeco-tinged “Move On Up” pays homage to Curtis Mayfield and showcases the powerful horn section of ConFunkShun. “While looking to cover a song from the 70s, we could think of nothing better then to call on master Curtis Mayfield’s song of awareness,” shares Cooper. “With our love of Zydeco, New Orleans and Louisiana, we wanted to shake things up a bit with the old squeezebox.” ConFunkShun further delights with such satisfying numbers as “Taboo,” which features Felton and pays tribute to The Whispers and the ultra sexy “It’s On Tonight.”

Known for their unrivaled ability to create a frenzy on the dance floor, ConFunkShun serves up the undeniable “Once I Get In It,” which unites them with Tony! Toni! Toné! This marks the first time the bands have collaborated with one another. Felton says, “We recorded the vocals in D’Wayne’s living room and made up the lyrics for the bridge on the spot!” More Than Love concludes with the exhilarating and rhythmically charged “Night-Liter,” which allows the band to stretch out, once again proving why they have remained a force to reckon with all these years. The band’s name, ConFunkShun, was actually taken from a title of an old Harvey Fuqua and the Nite Liters song.

“This album was clearly a must do for me,” Michael Cooper confides. “The main reason is simply because we can, we are able and we should. Too often people are falling much too early. We have been blessed to still be playing and loving the music, and to still have fans who are still buying and following our music. Our love of the music, drive, family and determination has kept us going all these years.” Felton adds, “We have been blessed to work with some amazing producers, songwriters, and arrangers such as Skip Scarborough, Maurice Starr, and Eumir Deodato. Plus, as a Top 40 band and as studio musicians at Stax and other recording studios, we absorbed all of that great music that not only came before us, but what was being created at that time. We’ve taken all of that and tried put that back into our recordings. Over the years our fans have responded and here we are.”

The challenge for any band with past success is to create new music that will please their already devoted fans but at the same time generate a fresh take on their music that connects with today’s contemporary audience. ConFunkShun has been collaborating with P Music Group Inc.’s Marlon McClain. P Music Group, Inc.’s founder, Michael Paran, has been the creative force behind the hit-making second career of R&B icon Charlie Wilson, generating numerous accolades for Wilson including number one records and nine Grammy Award nominations.

More Than Love is an exciting chapter in the evolution of ConFunkShun. For over two decades they have found a way into our hearts and ears with their timeless and funky anthems and memorable slow jams. The new album is a testament to their staying power and ability to deliver music that is right on time and in the pocket. Michael Cooper sums up the secret to their success simply: “ConFunkShun is still all about Funk ‘N Love. That’s what we’ve always promoted.”