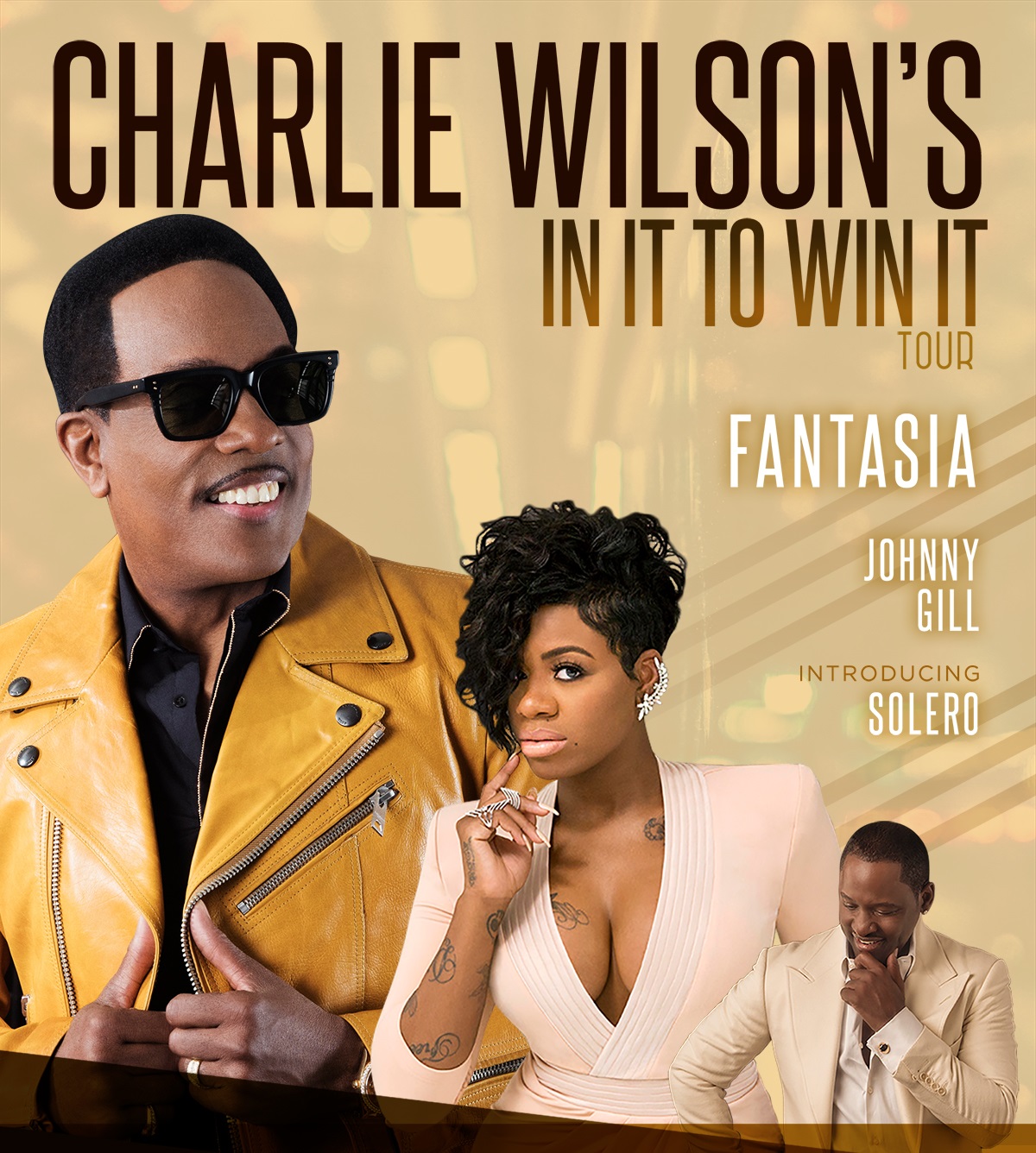 ANNOUNCES THE RELEASE OF HIS NEW ALBUM

IN IT TO WIN IT

AND WILL KICK OFF HIS

IN IT TO WIN IT  TOUR

SPECIAL GUESTS ON THE TOUR ARE FANTASIA, JOHNNY GILL AND SOLERO

Los Angeles, CA (December 5, 2016) – Eleven-time Grammy nominee, Charlie Wilson, announced today that his upcoming national arena tour will kick off on February 8, 2017 in Norfolk, VA.  The tour, In It To Win It, is also the title of Wilson’s new album which is slated for release on February 17, 2017 and features musical guests Snoop Dogg, Pitbull, Robin Thicke, Wiz Khalifa, and TI.  The first single, “Chills,” is coming soon.

In It To Win It album!  Customers will receive a redemption email from Ticketmaster shortly after their purchase with instructions on how to secure their copy of the CD.   Any album redemption submitted before the album release date will be received by the customer on the official album release date.

VIP packages are also available for purchase and include:

THE CHARLIE WILSON “IN IT TO WIN IT” MEET & GREET EXPERIENCE

“I am excited about being on the road with my friends Grammy-Award winner, Fantasia, and four time Grammy-Award nominee, Johnny Gill” stated Wilson.  “As usual, folks should come prepared for a party.  I am looking forward to performing my new single, “Chills” together with some music from my new album and my classic hits.”

In 2015 Wilson completed a critically-acclaimed, sold-out arena tour, Forever Charlie, which was the top winter tour of 2015.  “Charlie Wilson leads the pack of touring artists on the weekly Hot Tours roundup reported from his winter trek in support of the album, Forever Charlie, released in January.”  (Billboard, March 19, 2015.)

Also joining Charlie on their first national U.S. tour is P Music Group’s pop music duo, Solero who have over 8 million views on their YouTube channel: www.youtube.com/SoleroTV. Their first single “Greenlight” from their debut EP is scheduled for release February 2017. Check them out at www.solerobrothers.com.

“2017 is going to be an epic year for Charlie Wilson.  In addition to his upcoming arena tour, we have a great new album that includes some of today’s top musical artists,” stated Michael Paran, Wilson’s manager and CEO of P Music Group.  “The new album represents some of the best music Charlie has recorded in his career thus far.  He has a very diverse fan base and there is something on this album for everyone.”

AEG Live is one of the largest live music companies in the world.  The company is dedicated to all aspects of live contemporary music performances, including producing and promoting global and regional concert tours, music events and world-renowned festivals.  AEG Live operates in North America, Europe and Asia through 16 regional offices that support its tours which include such artists as Taylor Swift, Paul McCartney, The Rolling Stones, Justin Bieber, Katy Perry and Kenny Chesney; produce or support over 25 music festivals, including the iconic Coachella Valley Music & Arts Festival; and owns, manages or books more than 60 clubs and theaters.  AEG Live presents more than 8,000 shows annually worldwide and conducts business under such globally renowned brands as AEG Live, Goldenvoice, Concerts West, Messina Touring Group, Marshall Arts LTD, and Madison House Presents.  For more information visit www.aeglive.com.