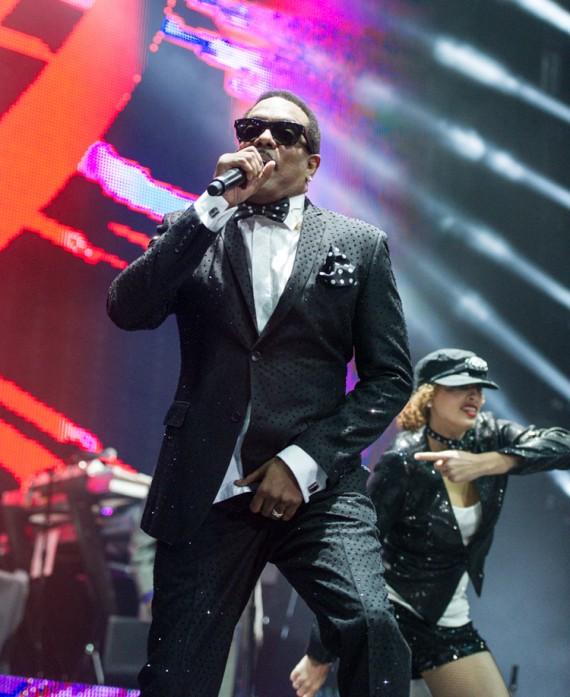 The reviews are in and everyone can’t get enough of Charlie’s Essence Music Festival and BET performances! Charlie left the crowd on their feet wanting more Uncle Charlie! Check out what everyone had to say below.

“…the night’s true headliner was Charlie Wilson, who had the crowd on its feet as he put on his trademark show, complete with costume changes for both him and his dancers.”

“The Superdome didn’t fully come alive until Charlie Wilson stepped on stage… [He] took fans out from between the rows and into the aisles to dance.”
Billboard

“He dropped a bomb. His post-Gap Band career has become so compelling that he could dispense with ‘You Dropped a Bomb on Me’ midway through the set. ‘I went from rags to riches and riches to rags’ he sang in a gospel passage that laid out the story that many in the Dome knew by heart. Wilson enjoyed enormous success with the Gap Band, became an alcoholic and drug addict, ended up homeless, then sobered up —18 years, he sang — with the help of the Lord. It’s a narrative that earned deafening applause when he sang it, but it wouldn’t mean as much if he wasn’t as compelling as he has become.”
USA Today

“If there’s one thing Charlie Wilson knows how to do, it’s entertain a crowd. The Superdome was rocking in anticipation of Wilson’s return performance at. And, Wilson didn’t disappoint as he continues to defy the odds and prove that he’s more than just an old-school performer.”
The Times – Greater New Orleans Area

“Essence Music Festival veteran Charlie Wilson served as the last act before headliner New Edition and he is quickly evolving into becoming what Maze featuring Frankie Beverly had been in earlier – a highly anticipated staple among the performance lineup.”
St. Louis American

“Justin Timberlake urged Wilson to sing after his heartfelt acceptance speech, and Wilson quickly brought the audience to its feet with the ballad ‘You Are’ before being joined by Snoop Dogg and Pharrell Williams.”
USA Today

“Speaking of ‘First name Charlie, Last name Wilson,’ he offered the best performances of the night performing his solo hits and many of the Gap Band’s greatest hits with the help of Justin Timberlake, Pharrell and Snoop Lion.”
The Washington Post

“We’re not going to say Uncle Charlie showed up that group of modern-day superstars, but there is video on the Internet this morning. Make your own decision.”
ABC News

“BET honored a legend and they did so without making it feel like a send-off. It was a celebration of Wilson’s continuing vigor.”
SPIN

“Not only did generations of R&B clash, they melded together in beautiful harmony when The Gap band singer flaunted his velvety chops besides Justin Timberlake, Snoop Lion and Pharrell post-acceptance speech.”
Vibe

“Charlie-Last Name-Wilson got everyone on their feet and all our favorite celebs breaking out into a two-step as they were in R&B heaven.”
Global Grind

“From Wilson’s swoon-worthy performance of ‘You Are’ to the group’s rendition of ‘You Dropped a Bomb on Me,’ the crowd was up from their seats and jiving to this unforgettable set.”
Philly.com

#NoStoppinUs is the first song with four credited artists to reach No. 1 on @billboard’s Adult R&B Airplay chart! P… https://t.co/smHA6thS6Z